Sam carried the can for HMI 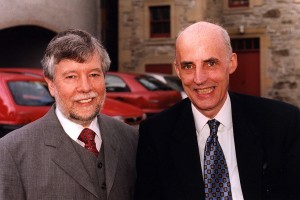 Many in the education bubble were saddened to learn of the death yesterday of Sam Galbraith, the former Children’s Minister at Holyrood, who had responsibility for Education when I was President of the EIS. He had also been a Minister in the first Blair Government and, with Donald Dewar, he prepared the ground for a Scottish Parliament.
A working class product of the Scottish meritocracy, he was recognised internationally as a leading neuro-surgeon long before he entered politics. That life experience was invaluable to the first administration at Holyrood.
He was the first politician to be invited to attend an EIS AGM and I was honoured to be President and his host at the time. A man given to straight talking, he took no offence when in a speech at a later date  to the TUC and to the delight of the SNP education spokesperson, Nicola Sturgeon, I described him as autocratic.  The context for the remark was the ruling Coalition’s determination to abolish unilaterally the statutory nature of national settlements on Pay and Conditions of Service. I suspect that Sam was being advised by those who had long sought the abolition of teachers’ rights.

Many of today’s obituaries have resurrected the Scottish Examination Fiasco of the year 2000 when Sam was the Minister of Education. At the time, the First Minister, Donald Dewar, quite rightly resisted calls for his resignation. The seeds of that debacle were sown long before Sam Galbraith took office. Her Majesty’s Inspectorate was the body initially responsible for the development of Higher Still. In the years running up to its implementation, the EIS and others were sharply critical of its assessment needs and sought a delay in  implementation. Helen Liddle, now a life peer, as the erstwhile Scottish Office Minister of Education  delayed the examinations for one year when we convinced her that many problems had still to be resolved. It was not enough.

It was a profoundly testing time for the Minister and he did not shirk questions on the calamitous outcome of the initiative for some young learners. The Chief Executive of the Scottish Qualifications Authority resigned within a few days. But what of the Chief Inspector of Schools, the principal policy adviser to the Government and chief architect of the new examination initiative?

He flew to Australia on holiday as the catastrophe unfolded.