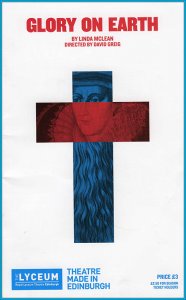 ‘I want Scotland to be at the heart of Europe’, the young Mary Queen of Scots tells her courtiers in David Greig’s fine production of Linda Mclean ‘s play, ‘Glory on Earth’,  at the Lyceum Theatre. Sharing the stage for most of the action is volatile preacher, John Knox , who viewed Mary as a danger to Scotland and,  as a woman,  unfit  not just to govern but devoid of any substantial  thoughts worthy of consideration.

It’s a classic binary, collision between the youth, joyfulness and frivolity  of the young , Catholic Mary and the dour, pulpit thumping fundamentalism of the formidable, middle-aged Knox. He is inward looking , intolerant, stubborn  and embraces an austere lifestyle;  the young Queen sees a world beyond the Palace and Scotland’s shores and relishes international collaboration. Sound familiar? I am not sure whether Linda McLean intended this as a BREXIT metaphor but it is strikingly appropriate today since Arlene and the Zealots , representing a party, founded by a fundamentalist, tub-thumping disciple of Knox,   are now  principal players .

Greig’s production   meets head-on the challenges of a rather wordy play with little movement and only two scenes – Holyrood Palace and the pulpit in St Giles’ Cathedral ; he succeeds admirably in keeping the audience totally engaged for its duration.  The incidental music  of  Cork man , John Mc Carthy ,  and dramatic lighting effects on the minimalist scenery keep the pace and narrative moving energetically, helped by the insouciance of a young cast.  Linda Mc Lean has written a play  for a modern Scotland ; it nuances  Indyfef II, gender politics, the inchoate power of  the young,  sectarianism and Brexit. Mary and Knox represent much more than the gruesome caricatures that we met in school history.

And all the better for it.