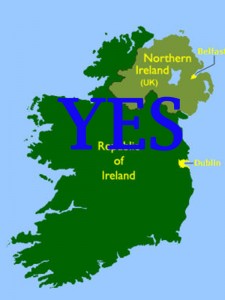 Lord Trimble has warned that a YES vote for Independence in Scotland could destabilise the peace process in Northern Ireland as it may increase pressure for a similar referendum to be held there also. He did concede that the democratic movement for constitutional change in Scotland was a potent model for republicans in the Six Counties. Indeed, it is the one which Gerry Adams and his party have successfully engaged with for the last twenty years. In an interview with a Sunday Paper, Trimble claimed to be worried that it would change the political dynamic by placing the United Ireland issue centre stage. He showed little concern for any potential reaction seven years ago when, wearing an Orange Sash, he triumphantly jigged, hand-in-hand with Paisley, through a Nationalist area on the Garvachy Road.   To some dispassionate observers, the award of a Nobel Peace Prize to Trimble,  made Henry Kissinger look a most deserving recipient.

Northern Ireland was born and  emerged from a threat of violent opposition by an armed, Protestant  Volunteer Force to Ireland’s  YES response for Gladstone’s Home Rule Bill. British Tories capitulated to them after the First World War and passed the Government of Ireland Act, partitioning many republicans in an artificial statelet. The Border has remained a critical issue for both sides since Northern Ireland was established.

The Acts of Union, 1706, on the other hand, were passed by the Parliaments of both England and Scotland. It was a union of two crowns, since they had shared a Monarch and was based in London. It was not welcomed by all citizens and there were reports of powerful,  vested interests and bribery being part of the settlement. What Burns would dub ‘Such a parcel of rogues in a Nation’. Ireland, the third of the “sister kingdoms”, was not included in the Union. It remained a separate kingdom and, indeed, was legally subordinate to Great Britain until 1784.

Since the Seventies, there has been a democratic deficit in Scotland whenever  a Tory administration, or, as is currently the case a Conservative-led coalition,ruled  in Westminster; in effect, the country was governed by a party that it did not elect. Scotland has been on a journey since 1970 and the reference points are not what is sometimes referred to as narrow nationalism  or separatism, they are a quest for the people of a nation to be able to take those decisions  which affect their well being and everyday lives.

A strong bond has always existed between Scotland and Ireland and, from this perspective, there is absolutely no reason why that should change. I can, however, understand the alarm which is being felt by some  Unionists in the Six Counties as their UK fragments. The majority there at present wish to remain citizens of the United Kingdom and I assume that will remain their view post an Independent Scotland, whatever England and Wales choose to call themselves. That will be respected by the Government in Scotland which will also want to maintain its links with the  Dublin Government. Others will know better than me what impact a YES vote might have on the attitude of the Dublin Administration towards  the Six Counties. It will most certainly be interesting, since there is every likelihood that it will be a Sinn Fein coalition; that will mean, of course, that a party, committed to Irish re-unification,  will be in Government  both  North and South.