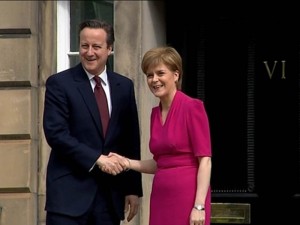 There’s a fairly bizarre letter in today’s Sunday Times from a resident of  Penrith – Soonu Verghese; I am uncertain of the gender as these old, Cumbrian names are unfamiliar to me. For the purposes of this piece, we will assume it is a woman. She argues that the clean sweep by the SNP means that Scottish voters ‘had voted for a bad democracy as there is no effective opposition in the Edinburgh Parliament’ . That’s a pretty staggering piece of comment from an English resident; is she blaming the SNP for the inadequacy of the opposition or was it the fault of the Scottish electorate?  She finishes her letter with the observation that we will become a one-party state when Cameron cedes further powers  to Holyrood.

Given the concerns the letter-writer has for democracy, it is surprising that she fails to mention last week’s appointments to the Scottish Office.  The Prime Minister has appointed former adviser, Andrew Dunlop, to be the new junior minister at the Scotland Office. In a manoeuvre that  the SNP described as ‘scandalous’, Dunlop has been given a peerage and drafted into the Government. For good measure, he was also an adviser to Thatcher when she was using  the Scottish people as guinea pigs for the ‘poll tax’. However, the most odious aspect of this piece of political chicanery is undoubtedly that someone has been appointed to an important Government position who is unelected and, therefore, accountable to nobody.

The anti- Scottish press has been trying to inflate the difficulties that Sturgeon as party leader will have in containing her predecessor and ensuring that he is on message. From personal experience, I have no doubt that Nicola Sturgeon is firmly in charge of the SNP both at Holyrood and in Westminster.  In the early days of the Scottish Parliament, Nicola held the Shadow Education brief which was very supportive of teachers.  As an EIS official, I complained to her that a local SNP Councillor was propagating a  policy view which was different to that held nationally. ‘She won’t after I have spoken to her’. And thus it was.

The determination of the First Minister was vividly illustrated this week when Cameron came calling at the Sturgeon official residence in Charlotte Square. His officials had pressed hard for the meeting to take place  at the Scottish Office ( a Westminster domain) but Nicola made it abundantly clear that it either happened at Bute House or not at all. The resulting media images created the impression of the British Prime Minister making a visit to a neighbouring country.

Exactly what the First Minister had planned.