No Scottish subsidy but finding James Connolly in Weymouth 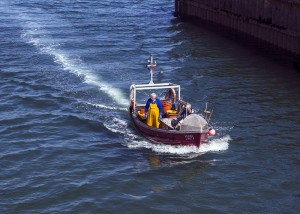 We have just spent a few gloriously sunny days in Eyemouth, an attractive, little  fishing port in the SE of Scotland. It is  Border country and traces of past wars are still visible. The topography of the landscape with its numerous little coves meant it was once a smugglers’ haven which continued right up into the twentieth century. The streets are narrow and many of the older houses still have cellars which once concealed contraband. The historical hero of the town is William Spears who led a rebellion against the ‘fish tithes’ of the Church of Scotland. There are echoes of the recent Mount Kinabalu outrage where the high jinks of the backpackers was said to have precipitated an earthquake;  very soon after the cost of getting the tithes removed had been met, the town was struck by a sudden catastrophe at sea (Eyemouth Disaster)   when on 14 October 1881 most of the fishing fleet, some 20 boats and 129 men from the town were lost in a terrible storm. Including victims from other coastal towns, a total of 189 men lost their lives.

There are panoramic views of two bays from the top of a hill which still has two old cannon pointing seawards. While I was up there taking some photos, I met a Berkshire couple and we chatted about the area and its history. I quipped that we had experienced a peaceful Border dispute in September 2014; the man believed that Scotland might still opt for Independence because ‘it is over-subsidised by England and doesn’t realise it’. I pointed out in reply that Scotland more than paid its way and that Westminster had squandered North Sea oil revenues on building London and its hinterland in the South East. Even with the current dip in prices, the oil returns still represent more than a quarter of all Corporation Tax to the Treasury. This subsidy notion has become common place, a blatant example of Treasury lies, populated in the right wing press but is fiscally and financially wrong. Scots represent 8.4% of the UK population but contribute 9.4% of the Treasury’s income; the Scottish deficit for 2009/10 was 6.9% – a full  3 points lower than that of England.  We parted on friendly terms, I think.

Alex, whom I met in ‘the Contented Sole’ pub,  spent 40 years as a fisherman and now works in the Harbour.  He had been to Dublin once for a rugby international and was hugely impressed by the City; what fascinated me was not that he had a splendid time in Temple Bar but that he had visited the GPO and Kilmainham Gaol. ‘ Connolly and Pearse’, he told me, ‘what great leaders they were. They were men who knew what had to be done and they were prepared to do it – the Irish must be very proud’. On his return to Scotland, he had obviously done some reading up on Connolly in particular and was manifestly proud of the philosophy and achievements of this fellow Scot.

I didn’t like to say that there were many among the glitterati in the South of Ireland who would be loath to share his enthusiasm for Connolly. What did the Bible say about prophets?

Surprising what may be found in Eyemouth.