Seamus Heaney – much more than a poet 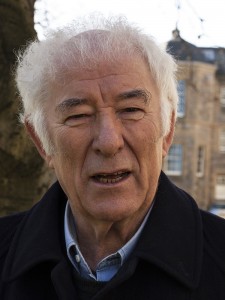 Seamus Heaney was three years older than me and a senior boarder when I was a dayboy at St Columb’s College in the 1950s. There was a well  established precept that you ignored all  those  in the years below, even siblings, if at all possible. The school was keen on ordinances of that nature; no teacher ever addressed a pupil by his Christian name,  lest  it should be interpreted as  character  weakness.   Most of us were aware of Heaney’s presence as he was a prefect but also because he had noted acting skills and starred in some of the school productions. There is absolutely no conceivable reason why Seamus would have been in any way aware of  my existence throughout the three years that we were there together.

In 1963 I contributed a piece on the political regime in Derry to a new   magazine   whose  target audience , I believed, would be Belfast students and some staff.  The bulk of the article detailed how a gerrymandered Londonderry Corporation openly discriminated against the majority Catholic population of the City in housing and employment.   One paragraph dealt with the failure of the Nationalist Party to provide leadership. I argued that there had to be a socialist alternative which united workers – Protestant/Catholic solidarity and I illustrated how that might work.  The Belfast Telegraph, sensing ‘a man bites dog’ story, ran a feature under the title, “Catholic student attacks flag waving Nationalists“.  To compound issues, Philip Hobsbaum, a lecturer in English at Queen’s, pointed out in a letter to the paper that my socialist references had been imported verbatim from DH  Lawrence’s ‘Belles Lettres’.  Heaney was lecturing in English and, as fellow Derrymen and  former College pupils, we had got to know each other fairly well. He was   on the editorial committee    but, more importantly, he was very close to Hobsbaum. Seamus calmed the waves. In truth, he felt that the Hobsbaum intervention had been unnecessarily pompous and I suspect that he courteously  told him so.

In 1968, Heaney was commissioned by the Listener to write an article on the Civil Rights’ Movement in Northern Ireland. It was a BBC publication which covered an eclectic  range of subject matter, not necessarily directly related to broadcasting, although events in Derry  frequently led the news bulletins of that period. I was a member of the Citizens’ Action Committee and the official media spokesperson and so Seamus treated me to a meal in the old City Hotel, our de facto headquarters and we ranged over the issues and our demands of the Stormont Government.  The teacher interviewed the pupil but, as others have pointed out , Seamus was an exemplary listener.

Heaney’s  poetry  was deeply  loved  in Scotland where I have lived for over 40 years. He was a frequent visitor here and he lauded the  work of our native poets, showing great affection for Burns, Mac Diarmuid etc and translated the Gaelic poet, Sorley Maclean. We met again at Stirling University shortly after he published ‘North’. When I learned in 2010 that he was coming to read at StAnza, the Spring Poetry Festival at St Andrews , we arranged to meet and I could take some photos. He phoned me from   St Andrews and suggested that we would have more time, if I could come  after breakfast the following morning.    It was a clear, bright, March day but bitterly cold; Seamus readily agreed to go with me into the grounds of Salvatore College where we chatted and I snapped away continuously. We laughed about the ‘flag-waving’ article but Seamus was genuinely disappointed to learn that it had prevented me from getting a teaching post in Derry, a flagrant abuse of power by  Bishop Farren who was, ‘de iure’ , the Chairman of every school board in the Diocese.

All the Heaney qualities were on display; he wore his scholarship and fame lightly; scheduled to do a sold-out reading in the afternoon, he  dismissed it as ‘that carry-on’; he listened, as if I had something valuable to contribute to this literary giant; when we discussed a BBC programme in which he and other distinguished ex-St Columb’s pupils had featured, he said generously, ‘your pal, Eamonn, (McCann) was the undoubted star of that programme’ .

I sent him some prints and received a thank you note, written in elegant, long hand with a fountain pen – the Conway Stewart, I presume.

” I thank you for the excellence of the work and the gift of the prints. Marie thinks-and I agree-that they get me very well ‘at this stage’ as she puts it”

Seamus was not just an outstanding writer but a great man as well.