Is it a sin to vote Tory? 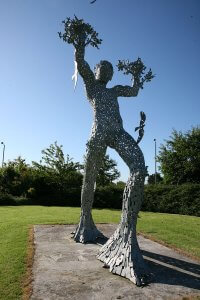 Those few remaining Church goers in Scotland may have find some additional challenges to face tomorrow morning.  As well as the polite smiles exchanged between worshippers, covert glances will seek to answer the question – did they vote Tory?  It was a secret ballot and only those unhinged extroverts in the Davidson mould will reveal   choices, made  in the polling station. However, it is now an established fact that five Tories were elected in this constituency, a former mining area which continues to celebrate on Gala Day  in its pit villages the social remnants of a deceased industry .    An air of distrust will pervade throughout what again promises  to be another fine, sunny Spring day. It will certainly extend to families and could split them;    psephologists  and a substantial amount of documented  evidence  suggest that the elderly become more conservative. Will my liberal, educated and  intelligent children be wondering if I had a momentary brain spasm in the polling booth and voted Tory?

Safeguarding of the capitalist system , is the prime objective of all Tory policy. It’s an ideology which has made them and their predecessors extremely rich.  In essence,  they believe that the wealthy have earned their capital and should not be asked to share it with the have-nots. Poor health standards, deprivation of educational funding and homelessness are the by-products of their political philosophy. For those Christians attending services tomorrow , it is in stark contrast to what they will hear about the teachings of the scripture. I am not a theologian but surely, given capitalism’s rejection of Christ’s teaching, it may well be sinful to vote Tory. A mortal one, at that,  because since Thatcher’s time we have seen how whole communities have been deliberately killed and people reduced to base, economic units.

For many years, I worked in Tullibody, a mining town which consistently showed the finest traditions of working class integrity and solidarity.  The Workers’ Club was renowned for its generosity to charity and those in need. I admired their honesty and transparency in the community; they worked hard to provide for their own future and that of their children.  Fact is, unfortunately,  that a Tory was elected in their ward (Clackmannanshire West) and an unwelcome edginess may now develop between neighbours and at social gatherings.  Those among them who recognise that the Daily Mail , the Sun and the rest of the right wing media lie to them continually, will be aware of the real facts; they know that Homelessness is up 31% across the UK; some of them may be forced to swallow their working class pride and visit the Alloa Foodbank;  they know that nearly a quarter a million disabled people have been forced into Unpaid Workfare…………..

The result of wicked,class warfare by a Tory Government at Westminster.