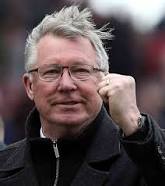 In a letter to our local paper, an Alloa man writes that he will be voting ‘NO’ in the Referendum because that’s the view of Sir Alex Ferguson. I am not one of the 650 000 who have bought the former United manager’s ‘Autobiography’. I suspect that most are purchased in blind loyalty by football illiterates; it may become the least read best seller in history.

From the reviews that I have seen, ‘control’ is central to Ferguson’s life philosophy; Ferguson reiterates throughout that the key to success is always maintaining control, a trait some may call control freakery. More discerning strategists in the ‘NO’ camp ( and they are thin on the ground – think of the blundersuses, George Foulkes and Ian Davidson) may well want to distance their campaign from those views because Scots, as a nation, have made clear their distinct choice in two previous referenda last century on Westminster domination.

The release of Government papers under the ‘Thirty Year Rule’ last week must surely have strengthened the resolve of thinking Scots to vote ‘YES’. They revealed that Thatcher’s Government had a secret ‘invisibility’ strategy to cut millions of pounds from Scotland’s budget in the hope that the public would not notice.    The architect of this grand theft was her Chief Policy Adviser, John Redwood, famed for his rousing version of the Welsh National Anthem when he was the Principality’s Secretary of State: http://www.youtube.com/watch?v=RIwBvjoLyZc

Plus ça change – there is a core of Tories who currently want to scrap the Barnett formula so that a possible £4bn may be shaved from the Scottish Treasury grant. This arrangement is not an example of Whitehall largesse but merely the return for disposal in Edinburgh of Scottish taxpayers’ money. Last week’s papers show clearly that deceit was a modus operandi in Westminster and there is absolutely no reason to believe that anything has changed in the interim.

A parallel may be found in Ferguson’s book; little mention is made of his crass split over a racehorse with John Magnier and JP McManus which resulted in the ownership of Old Trafford passing to the Glazers and   the club being saddled with a £270m debt.  For Scots, the worrying things, as Donald Rumsfield might have surmised, are what they are not being told.

To  escape Westminster lies and control, we all must robustly vote ‘YES’ on September 18th.