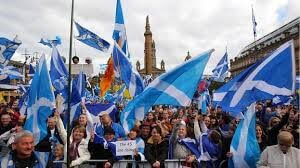 For nearly one hundred years, the Constitution, has been the predominant issue in every election, fought in Northern Ireland, even at Council level,  where there is a wearying, unionist pre-occupation with flags and emblems.  The results of the Election in Scotland have ensured that independence has shot to the top of the political agenda. The SNP made it clear during the Campaign that they were effectively contesting seats on social justice and austerity issues and the outcome was hugely rewarding for them.

However, in his Gordon acceptance speech, Alex Salmond said that the Scottish Lion had roared loudly and it would be foolish for any government to ignore it. In other words, this is yet another strong march towards our fundamental demand – Independence. Given the comprehensive nature of the result, it is impossible to conceive that the SNP manifesto for the Holyrood Election in a year’s time will not major on a demand for another referendum before 2020.

I suspect that the Tories will agree with me and will try to head off that possibility by offering some form of Home Rule, a federal solution within membership of the United Kingdom. In the last UK election in the whole island of Ireland in 1918, the much more radical Sinn Fein defeated the Home Rulers in a landslide victory, taking 73 0f the 105 seats. They recognised that Home Rule was a poor substitute for independence in political, economic, social and cultural terms. The people of Scotland have reached  that stage now and I don’t think that they will be easily bought off.  The gap in political thinking, particularly on social issues, between the Scots and the hard-nosed, ideologically driven Tory Government has become a chasm.  Westminster will struggle to bridge it and find a way to fend off another Independence Referendum.