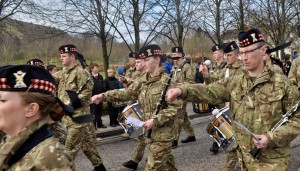 Ian Paisley perfected the tactic of the counter demonstration as a political spoiler during the sixties in Northern Ireland. Whenever a Civil Rights event was announced, he organised some ad hoc group to stage a protest at the same location. The RUC would inform Stormont that there was a serious risk of civil disorder and recommend the banning of both proposals. Bill Craig, the notoriously bigoted Minister of Home Affairs, duly obliged to the delight of Paisley and his followers.

The Battle of Bannockburn was fought on the 24 June, 1314; it is one of the most significant events in  Scotland’s history , a victory in the struggle for independence and the 700th anniversary is being celebrated throughout this week, culminating with a two day re-enactment and musical extravaganza at the site this weekend. Stirling Council, the Scottish Government and the National Trust have been planning the event for several years.

In September, of course, we have the Scottish Referendum. Stirling Council is currently administered by an inglorious Labour/Tory coalition, led by a young woman barrister with a declared commitment to fair play and human rights. However, fearful that the emotions engendered by the celebration of Bannockburn might bolster a rampant YES vote, the Council resorted to the old counter-demonstration ploy and made a successful proposal to host  Scotland’s Armed Forces’ Day also this weekend.

This piece of naked, political manoeuvring looks set to cost the citizens of Stirling dear. The cost of this military junket is currently estimated to be in excess of £500 000; half of that amount has been pledged by the Council from public funds but it has emerged that they have failed to raise commercial sponsorship for most of the balance. The MOD and the Scottish Government will  jointly contribute £160 000. The final bill to Council tax payers could be nearly £400 000 at a time of austerity when crucial services such as education, care for the elderly and social work are under severe strain.

Council Leader, Johanna Boyd, said at the time of her election last year;

“We all know that we are facing difficult, financial times.  Our aim will always be to protect the vital services we provide, giving every child the best possible start in life to help them realise their potential, and to look after Stirling’s older and most vulnerable citizens..”

The counter demonstration is a crude device and, in this case, it appears that it will also be an extremely expensive one for the people of Stirling.