Sturgeon strikes a blow for women and the SNP 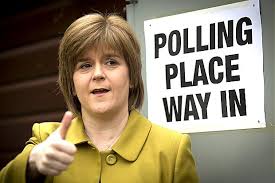 “Truth is stranger than fiction, but it is because Fiction is obliged to stick to possibilities; Truth isn’t.” (Mark Twain)

Today’s Telegraph reports that in a meeting last month with the French Ambassador, Scotland’s First Minister, Nicola Sturgeon, professed a preference for Cameron to be PM after the Election and that she didn’t consider Milliband to be of suitable calibre for the post. On Twitter this morning, she denounced the story as ‘100% untrue’; the French Ambassador has also stated that it did not happen. Strangely, the Telegraph in a departure from the usual, ethical, journalist protocol, did not  seek comment from either of them before running the piece.  Sturgeon is much too competent and experienced a politician to have pronounced so foolishly in public on the potential outcome of May 7th.

She was the shadow education spokesperson in the first Scottish Parliament when I was the teachers’ leader and we met on a number of occasions. Her poise, confidence and daunting ability to read and comprehend a brief were hugely impressive in such a young politician. In a speech to the TUC, I had described the actions of the Children’s Minister, the late Sam Galbraith, as ‘autocratic’; it was carried by the BBC shortly afterwards and I almost immediately got a call from Nicola to verify my choice of words. She is a  lawyer who appreciates the detail of language.

There will almost certainly be some strategists in the SNP machine who will have weighed the political advantages to them of a Tory Government after the Election. Independence is the fundamental raison d’être of the SNP and Cameron et al returned to Downing Street would further strengthen the argument that Scotland does not get the government at Westminster  that it votes for.

Sturgeon’s remarkable performance in the ITV Leadership Debate and the consistency of the polls since the Referendum, even allowing for the default vote, mean that it is a racing certainty that the SNP will return somewhere between 30 to 40 MPs to Westminster. Alex Salmond had difficulty attracting the female vote during the Referendum Campaign. A common theme in the crowd which mobbed Nicola on Edinburgh’s Royal Mile yesterday morning, was that not only had she struck a blow on the ITV debate for Scotland but, most importantly, for women too.

The SNP, of all the parties contesting this Election, is in the uniquely singular position that it cannot lose, regardless of the outcome on May 7th. To gain power, Milliband will have to agree a deal with it to end austerity and grant significant concessions to Holyrood. If the Tories return, Labour will take the blame and further strengthen SNP support.

It’s a win-win situation which Sturgeon and the SNP have cleverly engineered in the wake of a Referendum defeat.