Suffragettes and Civil Rights – the story goes on 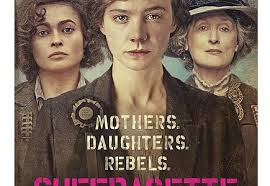 The movie, ‘Suffragette’,  does not ostensibly intend   to establish parallels with other protest  movements elsewhere  but as the action unfolds, the early days of the Sixties Civil Rights movement in the Six Counties and, specifically in Derry where I had an active role, were vividly recalled. The action opens in an East London laundry where Maud (Carey Mulligan) has worked for a pittance from childhood. Shirt factories were the biggest employers in Derry and the labour force  was 99% female. When the notoriously bigoted Home Affairs Minister, Bill Craig, in 1969, banned all marches within the City walls, except by his fellow Orangemen, the factory women downed tools and paraded around the town for two days.

The movie chooses a point in the suffragette journey  when the activists realise that peaceful  petitioning of Parliament is a waste of energy and only militant activism will have real impact. When sections of the right wing media describe a woman as  ‘militant feminist’ , they give voice to those men who feel that women should know their place. Social awakening and patriarchal lawmaking have no place in their lexicon. In time, civil rights  activists, in the eyes of some commentators, would become rebels, republicans and communists who sought to bring down the State.

The film uses a documentary style with hand held cameras for some of the scenes at Epsom and to great effect in depicting police brutality against   protesters. The cynical Special Branch   officer ( a bear-like Brendan Gleeson ) sees no merit in ‘Votes For Women’ and relishes  watching his thuggish police violently attack a rally which had gathered to hear Emily Pankhurst ( a posh Meryl Streep) speak from a town house balcony  and encourage increased  action.  My mind’s eye clearly recalls Chief Inspector Ross McGimpsy’s brutal attack on a cub reporter in Duke Street on the 5th October 1968.

In the movie , working class, courageous  women  were the foot soldiers for   middle class leaders; they saw peaceful protest achieve nothing  and the gradual change to more militant confrontation – blowing up post boxes , the burning of Lloyd George’s summer home and eventually the ultimate, blood sacrifice on Derby Day.

The director (Sarah Gavron)  makes clear in the end that the suffragette movement may have obtained votes for women but their struggle against a well entrenched, male establishment continues.

Similar rigidity is a hallmark of some Northern Ireland  Unionist thinking; much remains to be done.