Theresa May does an Arlene in Glasgow 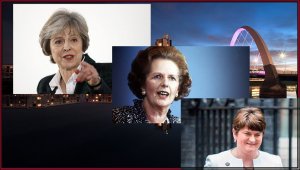 Margaret Thatcher came to Edinburgh in 1988 and delivered,  what  the Scottish Press branded,  ‘The Sermon on the Mound’  to the General  Assembly of the Church of Scotland. It was largely a para-theological justification for her views on capitalism and the free market. ‘Christianity is about spiritual redemption and not social reform.’  This most despised of Westminster leaders was politely received  by the guid brethren of the Kirk but her words cut no ice either with them or with  Scottish society at large. Four years later, the Tory party was annihilated north of the Border  at the General Election.

Theresa May arrived in Glasgow on Saturday to address what remains of the Tory Party in Scotland. In a speech of mind-boggling hypocrisy, she attacked ‘the focus on narrow  nationalism’  of the SNP Government.  Unbelievable stuff from a leader who tells us that ‘Brexit means Brexit’  which translates to the protection of England from contact with its neighbours on the Continent of Europe. Brexit is an audacious exercise in the furtherance of English nationalism and has the potential to destroy the economic destiny of thousands of workers and their families for generations to come. It reeks of dislike of foreigners and an old , long-gone imperialism. Neither May nor Thatcher showed  understanding or respect for the tolerant and utterly different sensitivities of the Scottish people and their elected leaders. Theresa May showed no respect either for the huge mandate which  the SNP was given by the people of Scotland.

Lack of respect has been the undoing of Arlene Foster and the DUP in the Six Counties.   Lack of respect, not just towards the Nationalist and Republican opposition but also  towards unionist voters  who were appalled at the gratuitous destruction of scarce resources by the Renewable Heating Incompetence .      Many of her natural supporters, particularly in the most affected rural areas , were aghast at the illogical but bizarrely racist decision to support BREXIT , a vote she lost roundly.   Irish farmers are sound in judgement and common sense;  it would take a lot of explaining to them why the  DUP spent £280 000 on a BREXIT advert in a paper which is not published in their area. Her snarling denunciation of those calling for the implementation of the Irish Language Act was seen by many , unionists and nationalists, as abominably disrespectful to the huge minority of the population.  Most of all, as a solicitor, her actions showed disrespect    for the law.  They implied that a higher burden of proof was required in Arlene’s case.

The chickens have come home to roost.