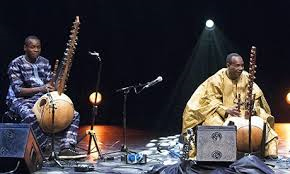 It was a rare joy to spend an evening at the Usher Hall in the company of these two cultured and dignified , Muslim gentleman  after a week in which we had  witnessed malevolent   scare-mongering by UKIP and the refusal of Northern Ireland’s First Minister, Peter Robinson, to condemn an abominable, racist rant by a havering, Protestant pastor.

There was a ripple of applause as the roadies brought the two kora onstage. It was not in the least inappropriate as the kora, this ancient, complicated and wondrous sounding instrument, was one of the stars of the night. The audience had come to see them as well as the musicians and many  took the opportunity at the interval to have a closer look. The long hardwood neck, typically mahogany, with its 21 strings is mounted on a hollowed out calabash. The sound it produces is sublimely magical.

In the west, our knowledge of Mali, for the most part, is limited to reports of a Tuareg revolt, an Islamist insurgency and successive coups d’état. Toumani Diabeté and his son, Sidiki are in Edinburgh to demonstrate that Mali is at the heart of African culture and music continues as its most celebrated export. They are heirs to a cultural caste of   musicians which stretches back at least seven hundred years; Toumani sees his duty as twofold – to sustain the tradition and to show the World through his artistry the rich tapestry of Malian cultural identity. These were two supreme maestros, treating us to enchanting melody and dexterous interplay of style.

Scottish audiences are generally reserved and in the Capital that can border on passive froideur. The two standing ovations were uninhibited and raucously enthusiastic. They finished their set with a Toumani composition, ‘Lampedusa’. This Italian island is a favoured landing spot for African immigrants on illegal, unreliable boats for which they  will have paid extortionate amounts to   people traffickers. Last year, three hundred, mainly Mali people, including whole families, drowned as they tried to reach it. A young French woman, seated beside me, who  had earlier raged against the advance of Le Pen, struggled to hold back her tears. This was an artistic and humanitarian view of the pain of emigration; it contrasted starkly with the exploitation practised by the politically ambitious.

We were both musically elated and emotionally bereft.