The Trouble with Women 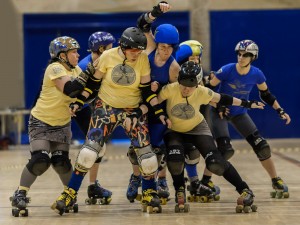 The Tory spin machine has been in overdrive, trying to convince us that women have arrived and in future will be treated as equals to male colleagues and receive promotion on merit. We know in reality that the cabinet re-shuffle was about presentation for the next election. Cameron demoted anyone that the Party polling antennae   had identified as a threat to its electoral chances. Gove was never going to escape. The numerical truth is that two women were elected to the Cabinet along with two new men. Those undecided Referendum voters should further  note that the lurch to the Right with preference for Fallon and Fox will have more impact on their future lives than all the window dressing about Liz Truss and Esther McVey.

Scandalous treatment of women and ingrained sexist attitudes are not the sole prerogative  of the Tory Party.  Adherence to an unquestionable belief in male primacy is   widespread throughout society and in some cultures is a given. That it might constitute serious injustice to half the of the population, for many, including sadly some women, is seldom an issue. Groups who have campaigned for equality of treatment and fair play over the years have been largely sidelined in the media which are mostly controlled by middle aged white men.

Centuries of institutional inequality at the most senior levels in the Church of England were swept away this week when the General Synod finally voted in favour of legislation paving the way for women bishops. However, the Catholic Church refuses even to discuss the possibility of ordaining women to the priesthood. Former Pope Benedict XVI intimated that such an undertaking   would be a grave sin. His views were met with widespread derision within the Church and the furore he caused was probably a factor in the decision to retire early.

Historically, the Principal of St Andrews University is offered membership of the Royal and Ancient Golf Club. The current incumbent, Professor Louise Richardson, a female, is not allowed in the Clubhouse which is a mere 600 yards from her home. St Andrews is ranked in the top five of British universities and has international renown. The Principal is very highly regarded throughout the academic world but that cuts little ice with the unreconstructed boors of the R&A. The defenders of its actions will repeatedly tell us that institutions have the right to set their own rules, even if they represent a contemptible breach of natural justice.

Women have a different attitude to power; their instinctive approach is to share management responsibility and to involve others who  also become empowered as a consequence. Generally, the masculine approach tends towards exclusivity and maximising power in the individual. Of course, there are exceptions to this  and some that have occurred in recent, political history are painfully obvious. However, where the opportunity to lead has been grasped by women, they have flourished, been respected and admired. Angela Merkel, Hilary Clinton, Mary Robinson and the fearless, young Malala Yousafzai all spring to mind immediately as outstanding representatives of the genre.

The failure of women to show ambition or, equally and more prevalently, their being denied opportunity by men, deprives all of us. Women are under-represented at leadership level in every field of human endeavour. It’s an imperative that  demands to be put right.

Let’s get on with it.