UKIP – what it means for Scots 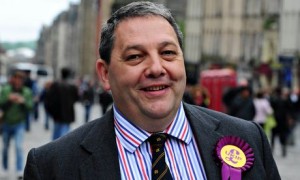 Clackmannanshire has just about 30 000 people on the Electoral Roll and, in a 30% turn-out last Thursday, 1200 of them voted for the UKIP candidate, David Coburn. That’s something over 1 2% – modest but significant and worrying. I have lived and worked in this area for nearly forty years; its people are fair minded, tolerant and hard working. Farage has engineered UKIP to pole  position on news broadcasts and in the Press for the past months and the BBC has been in there with the rest. It was mainly headline stuff with very little policy probing. Those who supported London-based Coburn must be scratching their heads, if they heard the post election GMS interview with him yesterday morning.

This was a display of astonishing ignorance and arrogance towards the Scottish people whom he has now been elected to represent in Brussels. Of course, on UKIP’s past record they will do nothing in Europe but take the salary and maximise expenses. In a Guardian interview today, LSE academic, Alan Sked, who founded the Party, says it has become Frankenstein’s monster. He claims that it has been taken over by the far Right, including some who were formerly BNP activists.

Nigel Farage has been adept at keeping policies under wraps and concentrating almost exclusively on sovereignty and immigration issues. However, we know from previous documents what UKIP feels on key issues which affect the people of Scotland. Here are some choice cuts:

The ballot is secret and we will never know for certain who voted for which party on Thursday but I have good reason to feel that some of those who supported UKIP last Thursday would not like to be associated in any shape or form with the stench of these policies.

Looking to the Scottish Referendum, the success of UKIP may be no bad thing. There will be pressure on the Tories to outsmart them by stealing their policies and moving to the Right, the Tony Blair model. Alongside that ,there may be the prospect of a Tory/UKIP coalition at Westminster. The YES Campaign must highlight what it  would mean for the people of Scotland and make sure that all the UKIP  policies  are known in detail to the electorate.

All is far from lost.