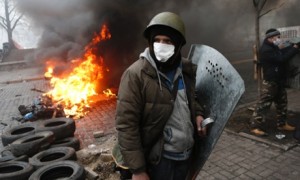 International outrage has been  reported    at the killing of civilians by Government forces in Kiev. The shooting of citizens by agents of the State is not unprecedented; Kent State University in 1970, Tianamen Square in 1989, Homs in the recent past  and most memorably for me in Derry on January 30th, 1972. Immediately following these atrocities, the well resourced Government propaganda machine thrusts into overdrive and blame will be apportioned unilaterally to the victims; the Chinese claimed that they were enforcing martial law; Edgar Hoover dissociated the FBI from the National Guard and denied having an agent on the campus; the British MOD claimed that the Army in Derry had come under fire and this was confirmed by Lord Widgery in his Inquiry which took less than one month to complete the most disgraceful whitewash in British legal history. In contrast, the Saville Inquiry into the same events took more than a decade.

The Herald asked me to write a comment piece which would appear on the day that Saville was      published,  June 16, 2010.

Nobody was allowed an advance copy of the Report but the evidence gathered and already published meant that there could only be one conclusion. Without any great prescience, I wrote:

” In my view, to bring soldiers before courts now would serve only to exculpate the real villains, Prime Minister Heath, Home Secretary, Reginald Maudling and the high command at the MOD.”

In the immediate aftermath of the shootings in Derry, Captain Michael Jackson, second in command on the day to Colonel Derek Wilford, prepared statements from those soldiers involved in the gunfire and linked them to ‘identified’ shooters among the civil rights marchers. This fabricated list became known as the ‘shotlist’ which was the substance of the MOD   statement on the events of the day and was circulated that evening  throughout the global network of UK embassies as the official version of events for press briefings. Captain Mike Jackson is now General Sir Michael Jackson, former Chief of the General Staff, the highest military position in Britain and certainly its most high profile officer. As Derry journalist, Eamonn McCann, has cogently argued in a recent pamphlet, “Go on the Paras“, Saville baulked at indicting Jackson because it would have directly linked Whitehall and the Heath Government with the atrocity.    It allowed Cameron to apologise in the House and indict one rogue officer and his men, without any blame being attached to the real villains in Whitehall and Downing Street.

The protesters and the Ukraine Government are said to have agreed a deal and we wish them well. Meanwhile at Police HQ in Kiev they are working on General Sir Mike Jackson’s template of lies.