View From The Bridge 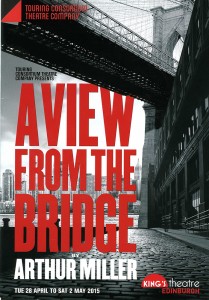 The Italian people were a race of emigrants, particularly through the early part of the Twentieth Century and in recent weeks the Nation and, particularly its Coast Guards, deserve Nobel Peace Prize nomination for their humanitarian work in rescuing desperate asylum seekers from the Mediterranean. Meanwhile, in the run up to the Election, the parties here outbid each other in ways to evade responsibility for the fruits of Empire.

We watched a confident, workman-like production of ‘A view from the Bridge’ at the Kings in Edinburgh last night; an Italian, working class community collides by the Brooklyn Bridge.  Jonathan Lewis was an unyielding Eddie Carnbone, tormented by his convictions but not as bullish in the part as Ken Stott proved some years back. Great drama is marked by the parallels that you make in your own life or community; the resonances of the human condition that are detectable in other contexts. The unspeakable, Jim Wells of the DUP, was forced from office  last week  for homophobic utterance which Carbone can only clumsily circumlocute. Immigration and ‘illegals’ are the great bogey men of the current political scene.

A minimalist, multi-purpose set worked well with actors deftly shifting furniture between scene changes and the production was well-paced to its final, emotional combustion.  There is a powerfully shocking moment when Catherine asserts her growing maturity to Eddie; it marked the initial indication that Carbone was not indestructible; the dramatic forces of the tragedy depend on the manner in which he reacts to events. It was a pivotal spike and was both well conceived and performed.  How many young lives have we seen wasted through failure to challenge controlling parents or adults?

The play must be a prescribed text for English Highers since half the stalls were filled last night by S5/6 pupils. These young theatre goers behaved impeccably and showed their appreciation with youthful exuberance at the curtain calls. If they are the destiny of Scotland, then the future of live  theatre will also depend on them.

Let’s hope that it becomes a lifestyle habit for them all.