The Weir is great craic but….. 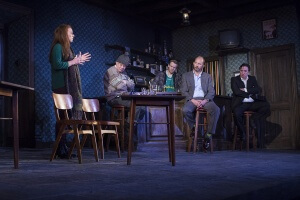 Capitalism has  exploited and exported but failed totally to capture the atmosphere of an Irish pub.  Amanda Gaughan’s fine production of Conor MacPherson’s award winning play , “The Weir’ at  the Lyceum.  permits us to sit with the drinkers by the turf fire and listen to four tales that smoulder with fear, loss, love,  Christian and  Pagan events; the mood music is the banter and craic that we expect and all will have experienced  in similar establishments across rural Ireland. Finbar(Frank McCusker) , well cut suit and shiny leather shoes, is the local boy made good, running a successful hotel in Carrick and escorting newly arrived   Valerie, around the place; there is a strong sense of envy among the other males although  in Finbar there remains an   unidentified emptiness. I found Finbar ‘s accoustic signature and cadences too reminiscent of Daniel O’Donnell and  strangely distracting

High jinks, insults, and a brief threat of fisticuff’s are seamlessly  interspersed with narrative monologues from each of the characters which in the males, particularly, reveal thwarted and moving lives. In the outpouring of their stories there are glimpses of great compassion and kindness which touched the characters. A broken Jack (Gary Lydon), following the wedding of his first and only serious love to another man, is overwhelmed by the actions of a stranger who recognises his plight. The gruff, socially awkward, small garage owner secures our sympathy, even when he clumsily tells  Valerie that Finbar will ‘hover about her like a fly round a big pile of shite’

The Weir and its monologue format has been compared to Brian  Friel’s  ‘Faith Fealer’   which had a very successful run at the same theatre last year. MacPherson would appreciate but reject that because  Friel’s play is a singular, dramatic miracle  and probably one of the finest dramas to have been written in the last one hundred years.   Valerie’s story is one of loss, pain and tragedy  – similar at a superficial level to that of Grace in Faithhealer.    Lucianne McEvoy (Valerie)  was a young , confident Dubliner , at ease with these rural strangers and ensnaring us in her personal nightmare that touched on our own worst, personal fears.  Jim, (Darragh Kelly),shy and reserved in company,  lives with his  aging mammy  and has also encountered something strange and revolting in a country churchyard. Brendan, (Brian Gleeson)  seemingly estranged from his sisters, is married to the pub.

The Weir evoked memories and empathy   with hours spent in Paddy Diver’s  Finntown pub a long time ago.

The skill, universality  and richness of MacPherson’s craft will similarly affect many.