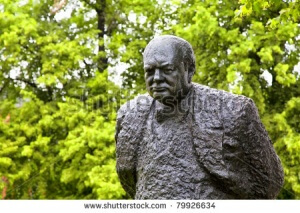 Winston Churchill died in 1965; he was last elected to office in 1961. On Sunday the Observer published the results of a survey by  the pollsters, BritainThinks .  Churchill topped the poll with an impressive 100% in the qualities  that  were determined necessary for leadership – ‘being decisive, ‘great communicator‘ and ‘having integrity‘. Given that he left office in 1964, only those over 50 were alive at the time and only today’s older generation would have any genuine experience of his impact as a politician.  The demographic breakdown of voters was not revealed but it is safe to assume (particularly if it was an internet poll) that the majority of those voting  fell into the 25 to 65 age group. Their judgement, we can assume,  must have resulted from hearsay  or the conclusions of some hagiography like the recent one from Boris Johnson.

The majority of their grandparents would have voted against Churchill in 1945. It is a credit to their safe , informed judgement that we have a welfare state today, despite the best efforts of recent Tory administrations to demolish it. They had sound reason to vote  against Churchill; among which were;

If Churchill is the gold standard for integrity in political leadership, then his successors need not harbour  high aspiration. It was my first year teaching at a Tyrone secondary  school in January 1965 when Churchill’s funeral took place; it was a cold miserable day and I remember  the caretaker holding up his newspaper and telling me:

A more mature reflection, I feel, than that of the participants in the Observer poll.