Wise Words in a Dublin Pub 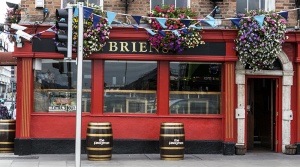 WISE WORDS IN A DUBLIN PUB

“What do you think is the biggest political crisis facing Britain and the rest of Europe at present?”  A question put to me by a guy that I found myself chatting to in a Dublin pub while we waited for the start of the Ireland-Georgia soccer match. Syria and the refugee crisis was my obvious answer.

“If someone, say a Palestinian, managed to convince ISIS to lay down their arms and seek change by democratic means, how would he be regarded?”

” Paddy Power would be offering very short odds on him for the Nobel Peace Prize,” I replied, “but it looks to be  a pretty bleak scenario.”

My new acquaintance had further questions.

“Thirty years ago, what was the biggest military and political issue to dominate Westminster?”

“Undoubtedly, the conflict in the North,” I suggested.

Now he got to the point of all these questions; Gerry Adams had played a  pivotal role in convincing the IRA  that the time for armed conflict was over and that an agreed, political solution was in the best interests of all people, North and South, Unionist, Republican and Nationalist. This chance meeting was with a middle aged man, Kieran, whose parents had  relocated to Dublin from Belfast in the early seventies. He was a software programmer in a   management position with one of the many multinationals which are well established in the Dublin area. He was particularly incensed that the political kudos from the Good Friday Agreement  had been attributed by the British and Irish media to Blair and Ahern; two people whose reputations, in Greek classical fashion, would soon crash and burn for different  reasons.

Some may question the simplistic nature of Kieran’s logic  but he had a point and it was glaringly obvious in some of the journalism that I encountered. My hotel supplied free copies of the Irish Independent, presumably provided by the paper to boost flagging circulation figures for advertisers.  The consistently high quality of Irish journalism attracted International admiration when I lived there over forty years ago; it is evidenced by the large numbers of Irish correspondents who have made World-wide reputations – Fergal Keane and Orla Guerin, for example. In the Sunday Independent, I chanced on a piece by Jim Cusack, whom I judged to be a graduate of an Enid Blyton  Media Studies course. Under the headline, ‘Provos panic as drug gang’s €500K is taken’  he was given a full half page to tell a story about drug operations and money laundering  in the Border area and he managed to write it without naming a single source or identifying any of the people involved but obliquely linking it to Adams and Sinn Fein. Eoghan Harris was another feature writer  in the same paper but it would take too long to delineate his professional failings.

Back to Kieran,  educated and a high earner, not the identikit profile of a Sinn Fein supporter in the South.  The party had a very successful European election campaign, has polled consistently well and is admired, even grudgingly by non-supporters, for its commitment and discipline in the Dáil. Kieran is quite prepared for a Taoiseach Adams and hopes that he will then be recognised by the Nobel Committee for his work on the Peace Process.

There may be a lot of silent Kierans out there.