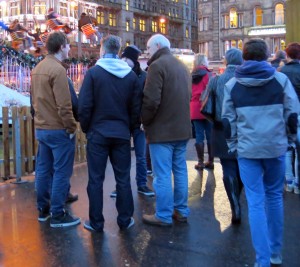 Language researchers at Glasgow University have discovered that people have a dual linguistic identity. They talk informally to friends and family in one way but affect  a more posh voice for the telephone and in the workplace. They conclude that the phenomenon occurs because people want to be better understood and, as is the way with academics, who don’t worry overmuch about being understood, they have named it ‘bidialectalism’.  The lead researcher,  Dr Jennifer Smith, says that young people, in particular, develop a local dialect which is used among members of their own community but also have a more formal, standardised speech to deploy outside of their local area. Scarcely earth-shattering findings, you might well conclude .

Surprisingly, the research brief already seems to have concluded that changes in speech patterns are made solely for the purposes of clarity and comprehension. A lot of work is planned to determine changes in patterns of speech of three generations of speakers, ranging from 15 to 80 years of age. They will deploy a range of quantitative analysis techniques  among the age groups to determine when and where accents switch.

Nowhere in the press reports to date of the research,  do I find any mention of class. The Hyacinth Bucket  character, so memorably played by Patricia Routledge , impressed most because we could all identify  the caricature in communities that we knew and, perhaps, even in our own extended family.  She had succumbed to unrelenting class pressure from  the media, fiction, advertisers and through fear of those that she perceived as having power over her.

Harry Enfield’s obnoxious cockney plasterer, ‘Loadsamoney’, was a grotesque stereotype of the eighties but more recently, two privately educated posh boys, David Walliams and Matt Lucas. showed decidedly  more brutal class savagery with their ‘Little Britain’ characters; Vicky Pollard was every Daily Mail reader’s  vision of young, working class women brought to life. Recently promoted by Cameron, Peter Lilley , had a previously  risible  ministerial career but was most noted for his pronouncement that Vicky typified many working class young women who got pregnant in order to jump the housing queue. Working class women, in particular, seem to be a principal target for these new class warriors.

I hope that the Glasgow researchers will broaden the scope of their research to look at wider issues which pressurise young people to alter their speech patterns. I would recommend a reading of Rhian E. Jones  new book ‘Pop-cultural wars on Class and Gender’ and Owen Jones seminal work , ‘Chavs’.

My Aunt Nellie had her own distinctive way of describing those who deserted their local  accent for perceived class uplift: ‘ the brachán comes through the porridge’  she would say. I have lived in several communities around the World. Has my accent been affected? Times Ed journalist, the late John Cairney, wrote a piece about me when  I was EIS national President , “ Mr Patton’s quiet acoustic signature of Ulster vowels, untainted by 30 years’ Scottish influence” , he said.

I’ll settle for that.